Clients are cutting back on US exposure

As the US and China continue to duke it out in the trade war, many Americans seem to be preparing for an economic downturn.

Ameliora Wealth Management CEO Rainer Nigg (pictured) told Citywire Switzerland that he has noted increased uncertainty among his US clients, particularly those in the ultra-high-net-worth range.

He said: ‘People are worried about what’s going on politically and economically. Ultra-highnet-worth clients want to diversify away from their US exposure. It’s about asset protection.’

In particular, he explained that they are concerned about the future of the dollar. ‘They are worried about the US dollar, so they are requesting portfolios without any US dollar risk. For them, international diversification is part of their wealth preservation strategy,’ he said.

However, Nigg himself remains fairly unconcerned with the state of the US economy, although believes that the trade war could be a drag. ‘Macro-economic  indicators don’t point towards US growth slowing down. But trade war tariffs will lead to higher prices, and consumer spending is likely to level off.’ 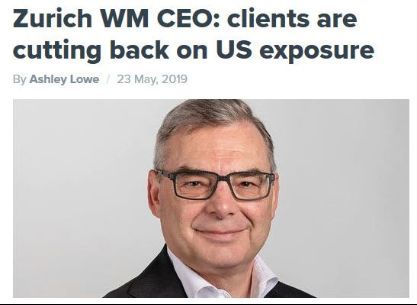